NOTE FROM P.HD:  Today the Supreme Court decided to depart from God’s created intent for marriage, which is not only for the purpose of spiritual and physical union… but to bring children into the world and create family.  Their decision to establish a legal definition of marriage for same sex couples under the law does not invalidate God’s Covenant of marriage.  There are those who will wrongly see this as an act of grace.  It is not.  This act of legalism on the part of the Supreme Court brings condemnation on those who participate in a legal definition of marriage.  They will never be able to experience the true joy and intimacy that God created under the Covenant of marriage because they are in violation of God’s Covenant.  It’s not a matter of law.  It’s a matter of grace.  God created marriage and thus is the only One who can say what marriage is.  Human courts do not have that privilege.  The fact that the American Supreme Court decided to introduce a secondary and lesser view of marriage apart from God is the height of arrogance on the part of the five justices who were in the majority.  5 men and women have set themselves above God and in the place to judge God.  I do not envy them, nor do I celebrate what they may believe to be an act of courage.

Why would God not recognize same sex marriage?  For two reasons.  The wages of sin is death.  Same Sex Marriage does not bring life into the world it brings death.  By virtue of it’s biology, every same sex marriage will end in the death of that generation.  I find it interesting that the natural consequence of rejecting God as the Creator of Life is homosexuality.  It’s as if God is saying, if you reject me as your Creator, then try and create life without me.  It’s a biological impossibility.  Contrast that to God who is the creator of life.  Life only comes through a marriage between a woman and a man.  The second reason is that God is love.  God cannot condone any lifestyle that is perpetuated through the destruction of the core psyche of an individual.  Through the dozens of testimonies I’ve heard of people delivered from Same Sex Attraction there were three common threads in their stories.  Same Sex Attraction is perpetuated through abuse, neglect or seduction… most of which occurs to children.  It is against the nature of God, who is love, to endorse and approve a lifestyle that is only perpetuated through child abuse.  To endorse same sex marriage is to tacitly approve of the child abuse and neglect that leads to same sex attraction.  As a lover of God and a lover of people, I simply cannot endorse same sex marriage because it violates God’s love and grace.

Any so called preacher of grace who says that God’s grace embraces same sex marriage does not understand grace.  Grace is the personal, powerful, Presence of God actively at work in the life of a believer to bring wholeness and completeness into every part of their being… including their sexual identity.  God desires to set people free, not give them a false sense of freedom while they live in their chains.  The fact that there are groups who refer to themselves as Gay Christians does not speak of God’s grace to love and accept them as they are.  It only speaks of the Church and it’s departure from ministering the grace of God in the Presence and Power of God to heal and restore.  Techniques won’t heal, Repairative Therapy won’t heal.  Only the power of God can heal and restore.

I understand that this is a defining issue for many.  I will loose friendships.  Not because I’ve separated myself from them, but because they will separate themselves from me because they do not wish to pursue the grace of God for their lives.  There are those who will seek to present and all-embracing view of grace that is devoid of Jesus.  They will seek to define grace in philosophical or sentimental terms.  But you cannot have grace without Jesus and if you include Jesus, Jesus isn’t going to bless same sex marriage.  Jesus is going to set the captives free who struggle with same sex attraction because of the sins that were committed against them.  Every nation that comes to the point of embracing homosexuality is a nation that is in the decline.  Today America took a step backward into the dark ages.  The consequences that come from this decision is not God judging America.  It will be condemnation that we have brought upon ourselves.  A note to Christians.  You might say, well I didn’t do this.  Yes you did.  By not taking your place in our nation and allowing evil and wicked men into places of leadership, you have participated in this day.  We’ve the opportunity to put a godly men into government, but because we have turned away from the Lord we have become content to be ruled by ungodly men.  The Bible says that if we turn away from the Lord, God will give us the leaders we deserve.  Last election we had two leaders presented to us.  Neither represented God.  It was to me a revelation that God is giving us the leaders we deserve.  If we want a different nation, the only hope is revival.  Join me in praying for revival.

Washington (CNN)In a historic 5-4 ruling, the Supreme Court of the United States struck down same-sex marriage bans across the country.

Justice Anthony Kennedy voted to affirm that same-sex marriage is a right along with the other four liberal justices and read the Court’s opinion.

Here are some highlights from the Court’s opinion, as read by Kennedy:

1. “No union is more profound than marriage, for it embodies the highest ideals of love, fidelity, devotion, sacrifice and family. In forming a marital union, two people become something greater than they once were.”

2. “The nature of marriage is that, through its enduring bond, two persons together can find other freedoms, such as expression, intimacy, and spirituality. This is true for all persons, whatever their sexual orientation.”

3. “It would misunderstand these men and women to say they disrespect the idea of marriage. Their plea is that they do respect it, respect it so deeply that they seek to find its fulfillment for themselves. Their hope is not to be condemned to live in loneliness, excluded from one of civilization’s oldest institutions. They ask for equal dignity in the eyes of the law. The Constitution grants them that right

4. “The right of same-sex couples to marry that is part of the liberty promised by the Fourteenth Amendment is derived, too, from that Amendment’s guarantee of the equal protection of the laws.”

A key theme for Kennedy is how marriage impacts children:

5. “A third basis for protecting the right to marry is that it safeguards children and families and thus draws meaning from related rights of childrearing, procreation, and education.”

6. “As all parties agree, many same-sex couples provide loving and nurturing homes to their children, whether biological or adopted. And hundreds of thousands of children are presently being raised by such couples.”

7. “Without the recognition, stability, and predictability marriage offers, their children suffer the stigma of knowing their families are somehow lesser. They also suffer the significant material costs of being raised by unmarried parents, relegated through no fault of their own to a more difficult and uncertain family life. The marriage laws at issue here thus harm and humiliate the children of same-sex couples.”

The conservative response from Scalia

Each of the four conservative justices wrote their own dissent but Justice Antonin Scalia’s is the most blistering.

1. “The Supreme Court of the United States has descended from the disciplined legal reasoning of John Marshall and Joseph Story to the mystical aphorisms of the fortune cookie.”

2. “I write separately to call attention to this Court’s threat to American democracy.”

3. “The substance of today’s decree is not of immense personal importance to me … It is of overwhelming importance, however, who it is that rules me. Today’s decree says that my Ruler, and the Ruler of 320 million Americans coast-to-coast, is a majority of the nine lawyers on the Supreme Court.”

4. “Until the courts put a stop to it, public debate over same-sex marriage displayed American democracy at its best. The five Justices who compose today’s majority are entirely comfortable concluding that every State violated the Constitution for all of the 135 years between the Fourteenth Amendment’s ratification and Massachusetts’ permitting of same-sex marriages in 2003.”

5. “Who ever thought that intimacy and spirituality [whatever that means] were freedoms? And if intimacy is, one would think Freedom of Intimacy is abridged rather than expanded by marriage. Ask the nearest hippie. Expression, sure enough, is a freedom, but anyone in a long-lasting marriage will attest that that happy state constricts, rather than expands, what one can prudently say.” 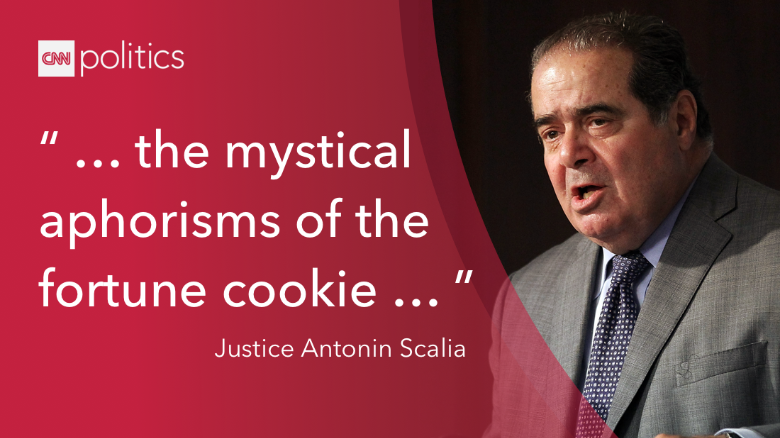 Scalia’s language has changed over the years

CNN Senior Legal Analyst Jeff Toobin points out that Scalia’s tone on homosexuality has changed in the ten years since he dissented in another opinion that Kennedy read – the case of Lawrence v. Texas in which the Court ruled that gay people could not be criminally prosecuted for having sex.

“Many Americans do not want persons who openly engage in homosexual conduct as partners in their business, as scoutmasters for their children, as teachers in their children’s schools, or as boarders in their home,” Scalia wrote in 2003. “They view this as protecting themselves and their families from a lifestyle that they believe to be immoral and destructive.”

This time around, Scalia started his dissent by saying that he takes issue with the Democratic process, instead of focusing on homosexuality itself.

“[Scalia] cannot talk the way he used to talk about gay people,” Toobin said, “because culturally, politically, even legally, it’s simply not appropriate.”

This site uses Akismet to reduce spam. Learn how your comment data is processed.

The West Coast Worship Conference is a 3 day conference where worship leaders, musicians, vocalists, senior pastors, and tech teams can be equipped with resources to take their ministry to the next level.

Our workshops are taught by industry experts and professionals. Leadership classes will teach worship leaders how to be more effective in building teams. We offer 20+ workshops that will be happening throughout the weekend.

Worshippers who aren’t currently involved in a ministry are also welcome to attend. The main sessions will encourage them to live a life of worship and many of the workshops can be translated into other areas of life and ministry.

To see the LIFE IN HD TIMELINE CLICK HERE.