Here is an interview that I had the privilege of being part of at N.A.M.M. It’s a funny story in that we were trying to find a quiet place to talk and we ended going outside some doors at the end of the hallway. I pulled a curtain inbetween the doors thinking I could jar the door enough to get back in. Unfortunately, the curtains were too thin and we were trapped outside. I panicked because the last band was playing and I needed to do the altar call, so I was pounding on the door trying to get in. We decided to do the interview and after the interview made some calls and finally reached someone to let us back in just in time for the close. I ended up using this little story as an illustration of those who never accepted Christ and are now banging on the door of heaven trying to get in. It was really effective. 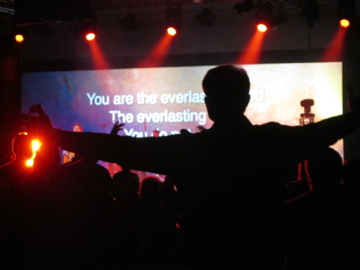 A worshiper raises his hands during the “House of Worship” concert at the 2013 NAMM Show in Anaheim. All photos by Susan Valot.

When you think of live music, you might think of a concert or a nightclub. But one of the hottest markets for live-performance equipment is about as far away from a nightclub as you can get: Church.

Susan Valot found out when she stopped by the National Association of Music Merchants trade show, or NAMM Show. The annual music product convention was held in in Anaheim last weekend.

“In any city today that you go to, there’s now more bands playing live music on Saturday night and Sunday morning in churches than there are in any clubs,” said Christian Musician magazine publisher Bruce Adolph.  “The DJ’s have hit the sector and taken away some live music.  Karaoke’s hurt live music.  But a lot of the guys are actually returning to church and playing music.”

That’s why pastors and worship leaders started to come to the music show that’s more known for its rock star sightings.  Holland Davis is one of those pastors, from Worship Life Calvary Church in Orange County’s San Clemente, and said churches are now the largest purchasing market of audio-visual equipment in the U.S. 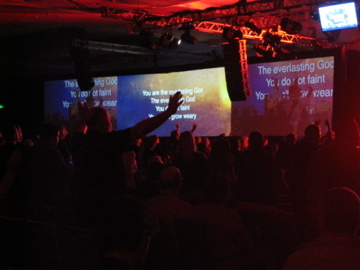 People at the “House of Worship” concert are moved by the music by Christian bands at the 2013 NAMM Show in Anaheim.

“There’s over 300,000 churches in America alone,” Davis said. “And so just the sheer volume of churches and they all use audio equipment, microphones, instruments, lighting.  And we’re in a time where the number of churches that are being started from scratch is phenomenal.”

The cost of audio equipment has gone down, now more in tune with a house of worship’s pocketbook.  Davis said churches have advanced alongside technology.

“It used to be that every church you went to had a live pastor,” Davis said. “But, for instance, in Southern California, we have, you know, Saddleback Church, which has, I think, 18 campuses with one pastor that’s live and all the rest have video campuses.  But they all have live musicians.” 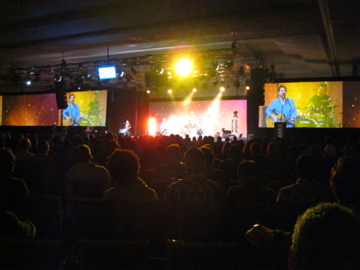 Christian musician Brenton Brown performs at the “House of Worship” concert at the 2013 NAMM Show in Anaheim. The annual concert at the music trade show puts the spotlight on Christian bands and audio-video equipment geared toward churches.

Mike Overlin works for Yamaha, and deals with the company’s house of worship market. He said church music is changing to more of a rock sound – not so much because of technology, but because it’s adapting to what’s trendy in music these days. “It’s not that any one style is better than the other, but the way I’ve always kind of explained it is that if you’re in Germany, you don’t preach in French,” Overlin said. “So you kind of use the language that people will understand.”

Part of upgrading churches is getting music leaders and volunteers to understand the ever-changing technology. A few dozen people attended a session at the NAMM Show about how to set up microphones in church.  Among them, audio guy Fred Suesoff of Destiny Community Church in Whittier.  He sees modern music as an evangelism tool. “You have to use the entertainment aspect to bring people who don’t go to church to get them coming to church,” Suesoff said. “And once they’re there, you know, God does the rest.”

Christian Musician magazine founder Bruce Adolph points out that in today’s high-tech world, people expect high-quality music, whether it’s in the movies, on TV… or in church.